Members of the North Attleboro planning board visited a Rhode Island medical marijuana cultivation facility run by a Hope Heal Health, a company currently seeking to open a facility in the city. Hope heal health has leased a building in North Attleboro’s industrial park to grow and manufacture medical marijuana products. Before they can begin operations, however, Hope Heal Health will need the OK from the planning 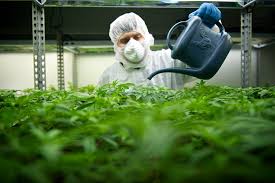 The president and CEO of the company, John Rogue, invited planning board officials to tour one of the cultivation facilities owned by his Rhode Island company in Warwick. Many of the officials’ worries were put at ease after touring the facility. Town Planner Nancy Runkle said that, “It’s really just like another plant nursery.” Selectman Chairman Patrick Reynolds was also pleased by the inconspicuous appearance of the building and lack of discernible smell from outside the facility. He commented that, “It’s a very normal workplace environment.”

Rogue also hopes to open a dispensary as well but that would most likely be met with more obstacles than a grow facility. However if both of his proposals are approved, Rogue forecasts 100 jobs with an average salary of $45,000 and $9 million in revenue could be brought to North Attleboro. While most of the jobs would be in the grow facility the revenue would rely heavily on the approval of a dispensary. Rogue is optimistic about getting approval but is also exploring other Massachusetts locations to open a dispensary if the board decides that part of his proposal.

By Appointment Only!
Ample Parking Available!

True Herbal Consults is dedicated to improving quality of life through natural and safe alternative therapeutic options while attempting to avoid undesirable side effects of traditional pharmaceuticals. We connect our clients with medical professionals that can guide them on a path to wellness through alternative methods using medical marijuana.
Copyright 2023 True Herbal Consulting LLC

True Herbal Consults LLC. helps its customers to understand available programs and, where appropriate, schedules convenient consultations with an independent medical professional. True Herbal Consults LLC. does not practice medicine, is not a health care facility, and is not regulated nor endorsed by the Rhode Island / Massachusetts Department of Health or any other state agency.